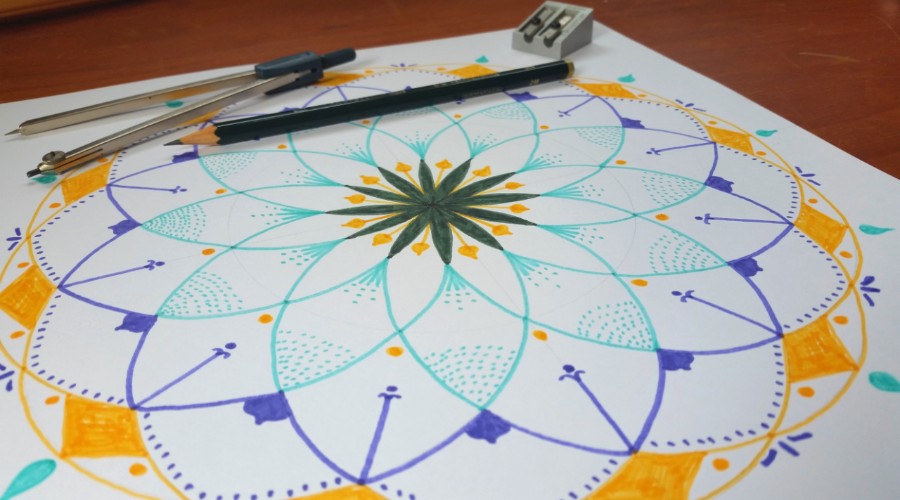 I slept really well this weekend. My monkey-mind often keeps me awake with its chittering and its gymnastic twists and turns, but this weekend it was still and calm and I fell asleep as soon as my head hit the pillow. Bliss.

I can thank Stephanie June Ellis for my good night’s sleep because I spent Saturday immersed in her fascinating drawing workshops at the Maleny Community Centre. Stephanie is a professional artist who specialises in geometric and biomorphic art. She holds regular workshops around Australia and, luckily for us, has now added the Sunshine Coast to her schedule.

Saturday’s workshops ran for two hours each and I booked in for all three of them. At first, I worried that a full day of drawing would be a bit much for me, particularly as I have no drawing skills! But the day flew by. I thoroughly enjoyed it. And, after spending the day absorbed in the drawing process under Stephanie’s expert guidance, all the things that usually preoccupy my monkey-mind had receded and my mind was filled with shape and colour.

Our day kicked off with “Mandala Meditation”. Stephanie taught us how to use our compasses to build a spiral grid as the framework for our mandalas. She then guided us through a short meditation to focus our attention and, with tranquil music playing in the background, we used pencils and markers to create our mandalas over the basic framework. Stephanie encouraged us to work silently and to contemplate the form of the mandala, adding lines, shapes and colours intuitively. As we worked, she asked us to jot down any thoughts and feelings that arose.

At the end of the workshop, we talked a bit about symbolism (I added Carl Jung’s “The Man and His Symbols” to my reading list) and colour therapy. I plan to take one of Stephanie’s suggestions on board and keep any mandalas that I draw in the future so that I can watch for trends in the colours that I use and my thoughts and feelings over time. I’m also very keen to do Stephanie’s Colour Therapy workshop in the future.

After a short break, we reconvened for the “Sacred Geometry” workshop. Stephanie demonstrated step by step how to construct the ‘invisible’ geometric frameworks used to form each of the motifs. The class was mainly about learning how to draw the shapes, but we did also touch on the sacred or spiritual meanings of the symbols as well. I find it interesting that so many symbols have similar meanings across multiple religious traditions.

We started by drawing the “vesica piscis” which, translated from Latin, literally means “bladder of the fish” due to its shape. This is the form that is said to give birth to all form. Then we drew the “seed of life” and “flower of life”. From the flower of life, we drew the Kabbalistic “tree of life” and the “merkaba”, which was the last and most complex form that we drew in this workshop.

I think the last workshop of the day, “Moroccan Patterns”, was the most technically challenging. Again, Stephanie demonstrated the process of using compass and ruler to draw the circles and lines to build the invisible framework that gradually builds up to form the tessellated pattern. Even though this was the “beginner” geometrical pattern class the process is still quite intricate. There was some frustrated muttering around the class at times as people struggled to get their heads around the steps. At certain points I felt like my page was just a complicated mess of lines, but I persevered and kept following the steps.

Our persistence paid off and it was fascinating to see the pattern building within itself. At first, I saw the pattern of hexagons surrounding the central star and thought “That’s it, I finally got it!” But then I added the next set of lines and then another and I started to see the same pattern of hexagons and stars emerging at a smaller scale within the original pattern. I felt a wonderful sense of achievement as my pattern came together.

I paid $123.20 for the day pass that allowed me to attend all three workshops. I felt that this was good value for my day of creative learning and I plan to attend more of Stephanie’s workshops in the future.

If you would like to see some of Stephanie’s work or book into one of her workshops go and visit her website www.stephaniejuneellis.com.au

If you would like us to write a feature about your business, please email us.

Scroll back to top